Grontmij Polska carried out a water maintenance plan for the Regional Water Management Board in Poznań. The basis for work was a database of sections of rivers from all over the Warta river basin divided into sections according to a methodology agreed upon with the Purchaser. Four people at the GIS department acquired all the necessary data from various sources, and put them into a coherent form. A key part of the entire project was to make an assessment of sections of water, and to propose protection options. From the technical point of view it consisted in describing each section by approx. 30 attributes. Around 20 people worked on the whole assessment. Time was short. Employees at the GIS department had to plan the work together with the estimated risk.

The first option, classic, was to divide the layer made of 2700 sections in 20 “packages” and send them via e-mail to employees and subcontractors. After a specific time the “packages” were to return via e-mail and be re-integrated. A seemingly trivial matter proved to be very risky. Here are the main risks:

Another option was the collaboration with GIS Support and the use of DIVI which at that time was in the phase of intensive tests. The following was identified as the main risks:

However, the list of benefits turned out to be far longer:

The DIVI option was selected. GIS users became administrators of the DIVI account and created accounts for all the people involved in the project. The layer with sections of rivers and forms of nature protection (on the basis of which the assessment was to be made) was uploaded into the system. Due to a very large number of editable attributes, working on an ordinary table of attributes turned out to be inconvenient. A simple and very convenient web-based data editor based on DIVI API was created (it took more than ten hours to create the application). 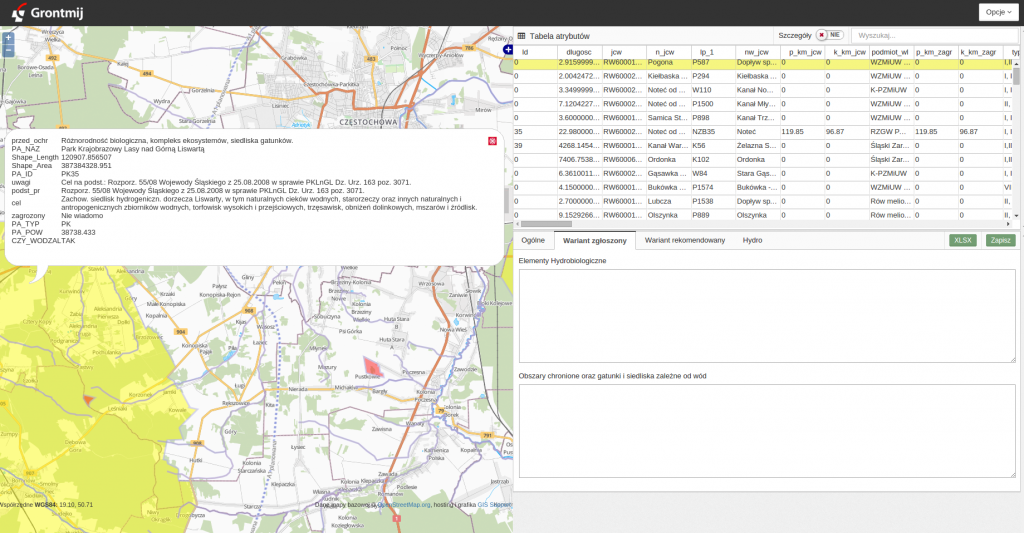 The work went quickly and smoothly. Of course, during the editing process there were some “changes to the concept”, and changes to the edited layer had to be made. Due to the use of DIVI it did not cause any problem. Editors did not even have to be informed about that situation as it did not affect their work.

The rate at which the work was carried out and the achieved quality (no data was damaged, no data needed improvement, no tedious browsing and troubleshooting) surprised everyone. However, experts in the field of environmental protection were the happiest ones. They had been afraid of the enormous amount of work to be done in the GIS environment to which they were not convinced. Working on a very simple web application turned out convenient for them. They could actually focus on assessing the content without struggling with data, software and GIS users. The best summary of the use of DIVI is a quote from an email we received after the completion of the project:

I am not into GIS,
I fear QGIS…
I work in DIVI